skip to main | skip to sidebar

Jason Varitek: Worth More than A Year?

Possibly. But not if the Red Sox get their way. They've offered Tek a one-year contract worth substantially less than the yearly salary of his Yankee counterpart, Jorge Posada. Personally, I think they could have tossed in another year, just for the hell of it. And we KNOW they've got money to spare (hell, ticket prices are high enough) so that they don't have to be stingy. Look at how much money they threw at Drew and Lugo. They've got the money. I don't think they really want him back at all, otherwise they wouldn't have made such a crappy offer.

I just don't know if I could live in a world where Kevin Cash was my every day catcher. I don't think it's possible for me to do that.

The Red Sox have also made an offer to Japanese rookie Junichi Tazwa reported to be worth somewhere around 6 million. They've got 6 million to blow on an unsigned Japanese rookie, but for a veteran Captain... jeez. These Sox.

I know! Ok, I know that I'm beyond biased when it comes to Varitek. He is why I watch. He made me love this sport. And I don't want to have to miss him the way I miss Trot and Dougie just quite yet. Yes, I miss Ducky and others immensely. At least Ducky I can see regularly, and I can hop down to Baltimore basically whenever I feel like to catch a game. And he is there, and I adore him. But Varitek, if he goes, will not go to an AL East team. I don't think anyone around here has any use for him. MAYBE NL east, but even that's a hopeless prayer.

No, Varitek can't go anywhere. He needs to stay in Boston.

In other news, it is entirely possible that Julio Lugo will be gone by the end of the off-season. Yay! No offense to Lowrider or anything, but Orlando Cabrera's available, isn't he?

Ok, I'm done until something new happens.
Posted by Jup at 1:13 PM 0 comments

Ramon Ramirez: He who replaces Grumpy?

It is true? Rumors have started up this morning that Ramon Ramirez of the Kansas City Royals was traded to the Red Sox for Coco "Grumpy" Crisp... you know the guy. The one who threw punches at James Shields this year? The one we replaced in the ALCS last year only to replace his replacement with in the ALCS this year?

The guy we got from the Indians a few years back because he had a cool name and tended to know how to get on base? Yeah, him! He's gone.

A part of me is sort of sad, because I gave Coco HELL during his time with this team, and it was fun. I didn't hate him, I just felt very disappointed at everything he did. Cocoby Crispbury is no more. Heck, I can't even use Jacoco Crispbury any more.

So he was possibly traded to Kansas City... wow, he must have pissed someone off. Don't they already have a pretty full outfield? Regardless, Theo is making this team very boring. No Manny, no Schilling, no Dougie, no Ducky, now no Coco? Jeez, could we get a little personality here?
Posted by Jup at 10:46 AM 0 comments 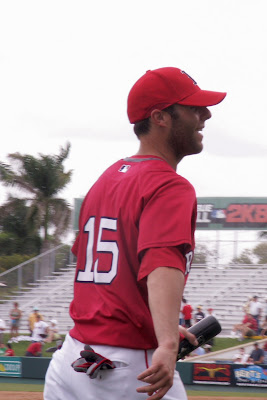 This should come as no shock whatsoever to anyone who's seen this guy play over the course of the season. I don't need to recite everything he's done right. Pedroia, a guy from our very own farm system, has just bitchslaped MLB and made everyone pay attention to him... which is kind of what he promised he'd do before the season even began.

Silver slugger... gold glove... AL MVP. It is the year of the munchkin. Congratulations, Dustin!

I have neglected blogging and other such baseball activities for the last few weeks, but so many things have happened that I feel I should say something... even if I do end up rambling.

1) I do not care that Obama was elected president. I don't like him. On the other side of that argument, I do not like John McCain, and I wouldn't have been happy if he won either. This election was a no-win situation for me. I just hope that this new president will be better than the old president (you know, the one with the lowest approval ratings in history? Yeah him. Don't complain, bitches, you people voted him in... TWICE)

2) Congratulations to Asshat and his new bride. I'll leave it at that.

3) Nick Swisher was traded to the Yankees. I didn't realize he had a good fastball - because we all know the Yankees need pitching, not bench players.

4) Munchkin is truly amazing, winning both the Gold Glove and the Silver Slugger award. I don't like the people who vote for the GG ever since 2006 when I honestly believe Gonzo was robbed. It's definitely a popularity contest (as is every other award), but I'm proud of our awesome second baseman for being so damn popular. He's one of the many bright spots on a hell of a season.

5) My beloved Jonny Lester won the Hutch award, which is given to a player who shows courage and determination through the season... or something along those lines. I'm not good with remembering the details of all the awards, and I'm just not motivated enough to look it up. Doesn't matter what it's for... Jon earned it, and I couldn't be any prouder of him this past year if I tried.

6) I'm so with Bill Lee on the Manny deal. For the people who wanted him gone - that one big bat in the middle of a very injured lineup would have more than compensated for the three runs we needed to get to the World Series. We would have won with Manny. But since we didn't, I'd like to remind people that Manny gave us the best years of his career. Be grateful and stop hating on the guy, will you? It's just hard for me to believe that "fans" give him so much shit for helping to bring this team to 2 World Series championships. It's ok to be upset that he's gone, just stop making him out to be some kind of villain. Manny being Manny provided many more good times than bad, and you know it.

7) Enough with picking on Jason Varitek. I know I had essentially decided that his time with a bat in his hand was over, and the Red Sox may need to part ways, but now that I've read and heard so much purely absurd criticism directed at him, I feel confident in saying I want him back. I want the Red Sox to re-sign him and give him the opportunity to show he's still useful. God damnit. Intangibles! Game calling! The man has value. Unfortunately, his horrible-plague-on-baseball agent, Scott Boras, wants far more than the value 'Tek has left. I've said it before... it's the management's job to make the hard decisions and the fans' job to be sentimental about guys who have been stable and worthy of praise for YEARS. My sentimentality wants Tek back. We'll see if Theo's fancy business plan agrees with me.

8) I love Jason Bay. I just don't want him to think people dislike him for the way the season ended. Jason, I love you. Be happy.

9) It's pretty official - Mike "Admiral" Timlin's tenure with the Red Sox has ended. I want to extend my most sincere and saddened "THANK YOU" to the Admiral for all he's done for this organization. Two championships and six years later, we have to say goodbye. I hope people know that Mike gave his all, even this year. And while it's sad that he has to end his career with the Red Sox on a down note instead of on a high note (like, say, after winning the WS), I'd like to think that people will remember his time with this team for the value he brought, not for the struggles at the end. And remember him for the bullpen band... for the "Black Pearl," of which he truly was the Admiral, leading the young'uns into battle. Remember him for the way he would always be the first to charge out of the bullpen during a scuffle... jumping over whatever walls that dared get in his way. And if he finds a new team next season, remember that he was once one of us, and give him the applause he so rightly deserves. Thanks, Mike, and good luck.

10) For anyone who follows the Deftones, you may be aware that Chi Cheng was in a serious car accident not too long ago, and remains (to my knowledge) in a coma. The rest of the band has been posting updates daily, each day providing readers an idea of what they can do to send positive vibes into the world, hopefully helping Chi recover. Chi's mom, Jeanne, has been posting to provide these ideas. Even if you don't like the Deftones, some of the suggestions to send positive vibes are pretty thought provoking, and would be a really good boost of karma for anyone. I encourage people to go over to http://www.deftonesinstudio.blogspot.com/ and maybe consider working on good karma, or saying a prayer for Chi.

Hopefully there will be more good news from the Red Sox and Deftones departments in the coming days. I'll try to keep updated on what's going on.
Posted by Jup at 2:50 PM 0 comments